Do You Have to Leave the City to Live Well? 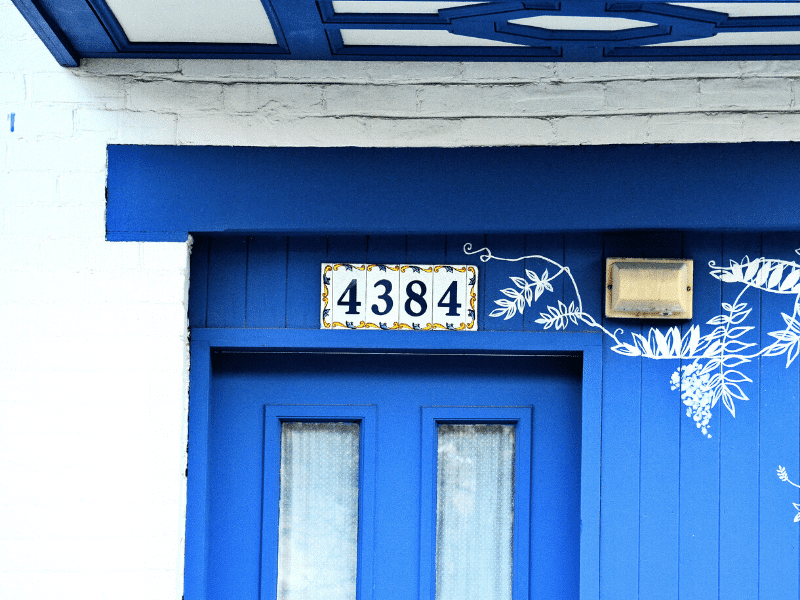 Contrary to popular stereotypes, it is possible to live sustainably in the city

“Cities should be built in the countryside: the air is so much purer.” — Henri Monnier

You are looking for a new home and want to live somewhere that is healthier for your family and for the planet. You’ll have to leave the city, right? Of course, that is an option, but is it the best one? Considering environmental impact as well as human health, let’s compare the respective advantages of the country versus city living.

The farther you get from cities and major traffic arteries, the cleaner the air, but how is air quality assessed in the first place? In the simplest terms, we can just look and smell. Everyone can appreciate the clarity of a blue sky and recognize that visually, the air seems cleaner in some places than in others. Similarly, we can smell the difference: car exhaust fumes and industrial emissions hang in the air, something cyclists know well! However, we cannot rely on our senses alone because since the 2000s, cars emit even finer particles. This particulate matter—the most harmful form of air pollution—is imperceptible without specialized equipment. Therefore, scientists rely on air-quality stations to know, among other things, the distribution of particulate matter in a given region (in this case, PM2.5 and PM10 air pollutants, where 2.5 and 10 refer to the respective particle sizes).

The AQI (Air Quality Index) map for Casablanca, Morocco (shown below), demonstrates that the areas suffering the most pollution exposure corresponds to large traffic arteries. Likewise, for people living in manufacturing districts, pollution is a daily and severe problem. Consider, for example, the large manufacturing cities in China and India. 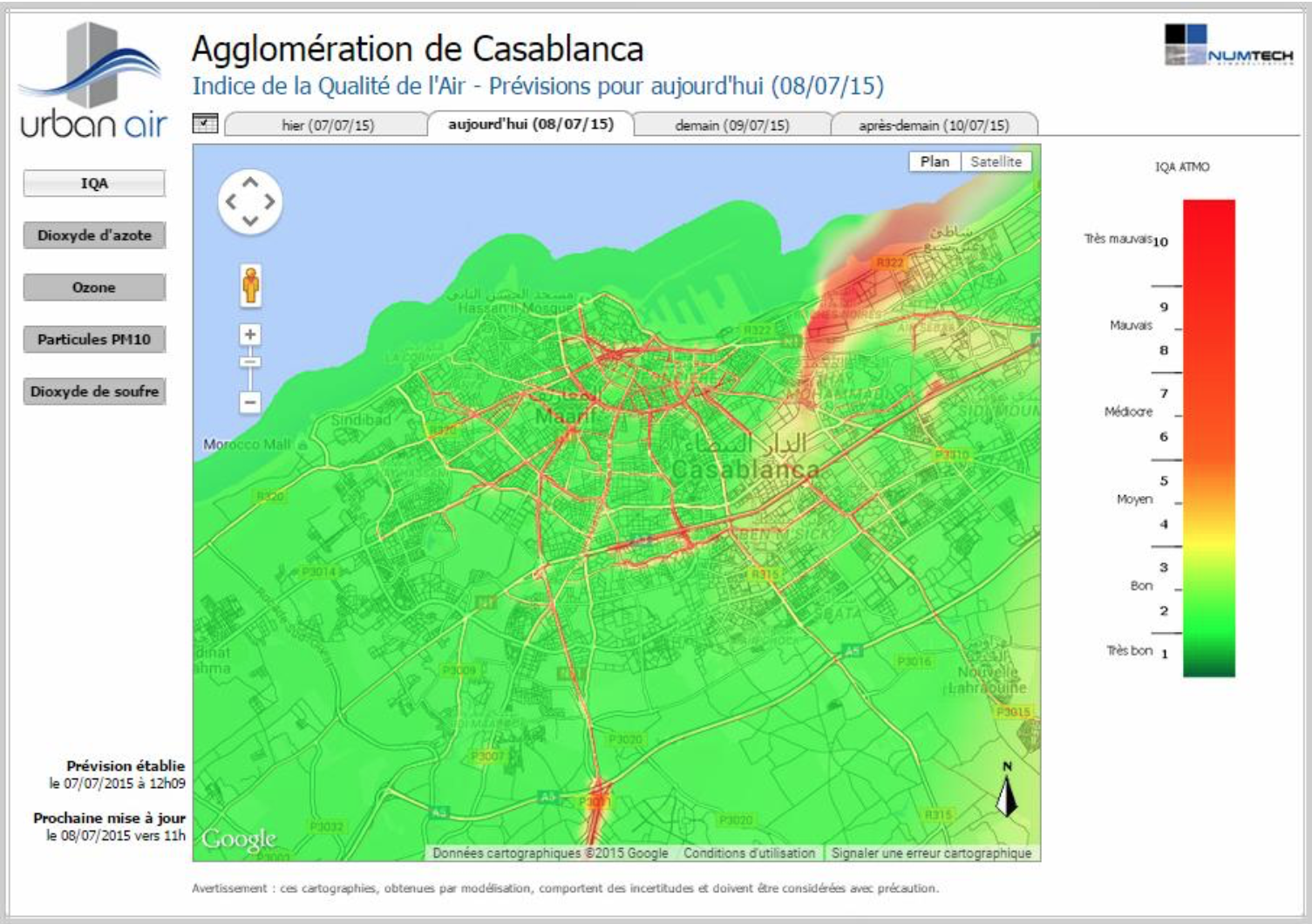 By comparison, in North America—and particularly in Quebec—we enjoy generally good air quality. The proof is in the data collected by the Air Quality Monitoring Network, which set the following threshold: “A day is characterized as a smog day when PM2.5 concentrations are greater than 35 ug/m3 for at least 3 hours on more than 75% of the agglomeration’s territory.” But most of the world’s agglomerations—i.e., contiguously populated areas consisting of cities and their suburbs—peak at an average of 50 ug/m3 daily, or more! Therefore, compared to people in Paris, Los Angeles, and Seoul, urban residents in Quebec, which across regions, averaged 1.9 smog days in 2016, are radically better off.

In summary, yes, overall air quality may be better in the country, but if you prefer city life, simply make it a rule to live away from highways and major manufacturing regions. And for those city dwellers at heart, rest assured that Quebec cities enjoy a better quality of air than most others around the world. Let’s hope it lasts!

For our health, and even more so for that of our children, particulate matter isn’t our only worry; exposure to radio waves must be taken into account and, to the extent possible, minimized.

We now know that civilian and military radios, telecommunication antennas, and electricity networks generate electromagnetic pollution called electrosmog. This residual electromagnetic field disrupts biological organisms at the chromosomal, hormonal, and neurological levels. We also know that the effects depend on an individual’s health. Thus, the term electromagnetic hypersensitivity (EHS) has been recognized by the World Health Organization (WHO) since 2005.

In 2019, the international medical community (especially pediatricians) sounded the alarm against fifth-generation cellular networks, or 5G for short, and the carcinogenic effects of telecommunication radio frequencies have been officially recognized by the US Department of Health. Our fears are justified!

But is this new? The public-health effects of electric fields have long been known. For example, as early as the 1980s, the scientific community has suspected an increased risk of leukemia in children growing up near power lines. But given the modern proliferation of connected devices, it is best to remain on guard and do our homework.

Can we find safer areas within cities?

In urban areas, there are more telecommunication antennas than in the countryside; there are more mobile users so the network needs to be more powerful. In addition, buildings block 5G’s shorter electromagnetic waves, so we have to compensate by installing more antennas to cover every corner. Moreover, because 5G frequencies are readily absorbed by human bodies, the mobile network must further saturate cities with even more antennas to function. We would like to be optimistic, but it is difficult.

So, what to do? First, it is necessary to spot the antennas, knowing that some are camouflaged. Then, should we categorically refuse to consider a home under a relay antenna? Not necessarily. Indeed, a study conducted by CNRS, France’s National Center for Scientific Research, shows that exposure to GSM and DCS wireless signals is at its highest about 280 meters from the relay antenna in urban areas, and one kilometer in peri-urban areas—i.e., those spaces immediately surrounding cities where urban and rural areas meet. If this criterion is crucial to your ecological housing project, we recommend measuring on-site radiation levels with a dosimeter or similar device.

Concerning the electrical grid, the transmission lines are generally buried in cities, but this is not the case in all neighborhoods. See, for example, Montreal’s Rosemont, Petite Patrie, and Plateau neighborhoods. Their overhead electrical network may add charm, but these suspended cables actually emit a residual electric field, in addition to constituting a danger if they were to fall to the ground! Let’s hope that these beautiful neighborhoods will benefit from renovations worthy of the soaring real estate prices they have experienced the last five years.

Is it better in the country? One advantage of peri-urban areas is that the relay antennas are more powerful, but also higher, more visible, and less numerous than in the city.

To grow your own produce, there is nothing like the countryside. An organic vegetable garden, composting, a small greenhouse for your winter crops, a chicken coop, and perhaps other animals, should you so desire—if this is your dream, moving from the city is certainly a viable option. The more space, the more capacity. There you can grow your own food with autonomy and without pesticides, revealing the gardener within.

But the city offers such possibilities too. Did you know that there are 97 community gardens in Montreal? The ruelles vertes (green alleys) movement has greened our neighborhoods, and other major cities around the world are implementing similar improvements. From Singapore to Munich to Paris, local policies encourage the greening of neighborhoods—it’s good for the planet and the people!

Impact on the planet

Millions of North Americans commute by car every day. Perhaps you are one of them? One advantage shared by city dwellers is that they can live near their place of work. Goodbye car, hello subway, bikes (weather permitting), or invigorating morning walk! Europeans are fortunate to have sophisticated and comfortable public-transportation systems that allow them to live in small towns and still reach their jobs by train or bus. In North America, it isn’t so easy. If you don’t live near your workplace, perhaps you can work from home? Anything is possible!

Outside the city, we can find beautiful homes nestled in the natural environment. In Mercier, east of Montreal, there are 2,500 sq. ft. homes on spacious lots for 400,000–500,000 CAD. There, you can have the organic garden of your dreams. Land prices are also lower outside of the city, so you can have more space in general.

On the other hand, the population is growing, and it is estimated that by 2050, more than 2 billion additional people will live in urban areas. We can expect even stronger demographic pressure in northern cities as populations migrate due to climate change. Imagine if you had to give 2 billion people 1500 square feet each. We would have to encroach upon our natural spaces, but we’d need even bigger forests!

However, we can move away from the city to enjoy attractive land prices without buying a home 10 times larger than we need. With the money we save, we can invest more in the design and quality of materials. On the road to Mont-Tremblant, you will find splendid, bold sustainable homes. Have we piqued your interest? Check out our properties and book a visit.

In terms of ecological impact, moreover, when the surface area per person is small and homes are closer together, fewer resources are used. For an isolated house in the country, it is necessary to pull the electrical and telecommunication cables and to connect to water and sewer systems, while in cities those services are shared. The same goes for heating and collective waste management! Choosing a place to live on a human scale is a reasonable goal.

It is our desire that these criteria will help you understand what is right for you—country or city living. Everyone is free to choose, of course, and whether you dream of settling down in the countryside or you prefer city life, you can live sustainably. We are happy to help you make your dreams come true.

We hope that this article can guide you as you take the first step of your real estate journey—namely, choosing the general area where we can help you find your dream home. In the heart of the countryside or in the heart of the city? Now you have the data to make an informed choice!

Translated in english by Kris McCoy

Published on Via Capitale du Mont-Royal’s blog on november 4th, 2019