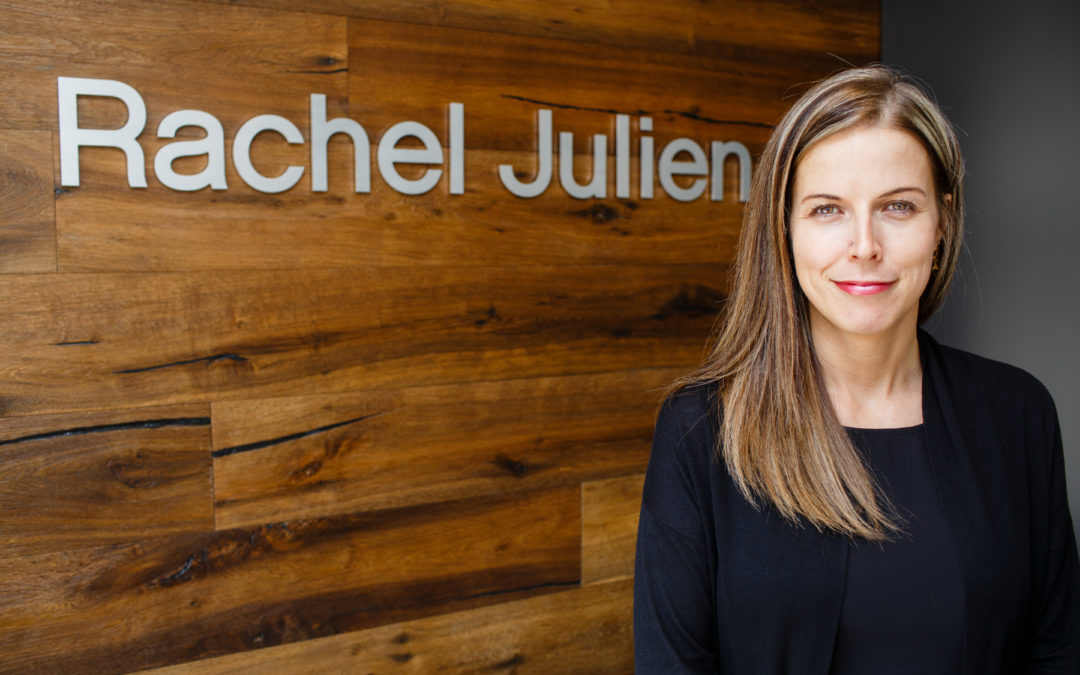 I have always had an real interest in the Rachel Julien’s (promoter, entrepreneur and developer) projects, living myself very close-by one of their major project (for which they received many awards), the Quartier 54, corner south-west of Rosemont and St-Hubert in the Petite Patrie area. It was built in 2008 (-2013).

Besides their ‘’eco’’ side inevitably speaking to me, I have always found that their projects stood out from others (especially in terms of conservation of the existing heritage, construction quality, etc…), so I then wanted to know more and meet the founders and managers of this company in order to seize their mindset more specifically.

It’s therefore on a Monday morning, april 29th to be precise, that I meet Melanie Robitaille, Rachel Julien’s vice-president and general director, in their offices in Hochelaga. 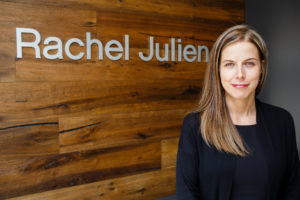 Melanie warmly welcomed me in her offices, and started to give me a little overview of her background. Actuary graduate, she completes her BAA at UQAM between 2003 and 2006. Strong, dynamic and determined, she explains that she is taking care of the business development within the company, and is also in charge of the finance department. Moreover, she is associate/stakeholder, as well as Denis, the president, and Benoit, the Vice-president Construction. Over the conversation, I understand that she manages her teams with the serene force of a true expert in her field, and that she prints her energy and her personality on the organizational culture of the company.

Yet, she doesn’t rest on her laurels : at the contrary, she takes risks (calculated ones !) and constantly seeks for new challenges. She believes that going out of her comfort zone will allow her to be more and more proactive. She is committed to learn by experiment, she likes to be the first one to go out there, ‘’pave the way’’ and take advantage of new opportunities, in order to share her findings afterwards with the actors of her field. The last ‘’baby’’ of the company ? To apply as a finalist for the contest C40 – Reinventing Cities (worldwide project that aims to make our future cities more sustainable; the first initiative was launched in Paris by the mayor Hidalgo), being the first carbon neutral project in Montreal. Her mindset regarding the contest ? ’’I have won already’’ she says, explaining that the challenge to participate and to mobilize the necessary resources for it already represents a victory. 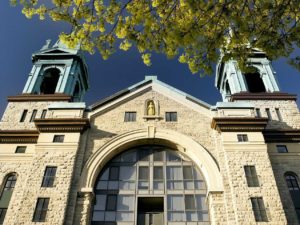 How it all begun…

Melanie explains that it’s her uncle, Denis Robitaille, who founded Rachel Julien in 1994; the condo projects were, at the time, a lot less developed than now. Visionary and Montreal lover, he was quickly the pioneer in the field, and became de facto a real change actor.

She starts to provide me with a general portrait of the company, and said that it ‘’started from scratch’’ : it was born in a worker’s family where the vision was mainly based on the reuse mindset. Melanie explains that they don’t define themselves so much as a ‘’family business’’ anymore, mainly because there has been quite a growth, thereby the term doesn’t really seem accurate anymore. However, it’s very interesting to note that the company’s values did not change and stayed decisively humans, modelled on an organic vision of the company, particularly because of the fact that all individuals bring to each other something and enrich themselves mutually, which Melanie is fundamentally convinced of. For instance, the company works with international architects, especially from Sweden : Melanie is indeed convinced that to learn from other countries represents one the main keys for a long-haul success.

Yet Melanie explains that they have, for now, very few partnerships : as a matter of fact, it’s important for them to conserve and protect their reputation, as they project values such as integrity and transparency. Moreover, she adds that it’s a considered choice, and that for now everything or almost everything is done internally, and that when they absolutely have to do business with other companies, they, themselves have to have the same values. A successful partnership example : the one with the company Prével on the well-known project les Bassins du Havre. The two companies shared the same values, and Melanie adds that the quality of the construction was also comparable. The perfect example of a good potential compatibility, leading to common projects.

The company also seeks to be a citizen one, strongly implied in its community. We can read these words from Denis on their web page : ‘’I have the privilege, with Rachel Julien, to participate to the metropolis’ vitality. For me, nothing brings more value and meaning to my job than to contribute to the architectural takeoff of one of the most beautiful cities in North America, to offer to its inhabitants access to property, while keeping alive its rich and unique patrimony.’’ (free translation from the original text in french)

But where does the name ‘’Rachel Julien’’ come from ? From one of their projects located on le Plateau, corner Rachel and Henri-Julien : it was a centenary hospice converted in condos, which has been restored in a way that it fits perfectly within its environment, and at the same time keeping the specificities from its own era. In fact, at that time, the company was more focused on repurposing and building revalorisation, in addition to becoming a developer for entirely new projects. 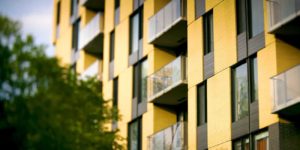 Rachel Julien, the ‘’shepherd’’ of the sustainable real estate

The sustainable side has always been at the heart of Rachel Julien’s vision, which is very clear : ‘’Transform and add value to Montreal urban landscape thanks to the construction of accessible, innovative and high quality condo projects, which contribute to architecture’s influence and patrimony’s conservation. In an era where the trend was more to demolish and rebuild blocks, Rachel Julien focuses on preserving the real estate heritage et elaborates projects that respect the urban architecture, in addition to add value to them by adapting them to the actual era.’’ (free translation from the original text in french)

Melanie explains that they were among the first ones to integrate LEED and Novoclimat certifications to their projects, and I note, once more, their indisputable leader position in the market in terms of sustainability. For her as for her associates, it was mandatory to go off the beaten tracks. Many green and eco-responsible technical initiatives were set up in their projects, for example urban agriculture, solar power installations, Passivhaus inspired techniques, recycling rainwater, systematic electrification of all the parking areas. In terms of space reutilization, here is a concrete example : when they have to use a sales office to market a new project, instead of taking it down afterwards like many promoters do when they don’t need it anymore, they reuse it for something else, or they at least repurpose the materials used. They, for instance, reuse all the spaces, including parkings. Their philosophy is truly ‘’sustainable’’ because by doing this, they question the essence of  ‘’construction’’ as in creating and building a new project from nothing. Moreover, Melanie emphasis the fact that they monitor all their projects, allowing in the same time a real feedback on the integration of all these elements to the different projects.

I then ask her in which way the different sustainable development jobs and positions were integrated to the company’s organizational chart. She answers that the sustainable development is directly integrated to all departments in the company; for example they work mainly with environmental engineers, in addition to the ‘’classic’’ engineers, so their teams are ‘’soaked’’ at all levels with the ‘’green’’ philosophy.

Yet Melanie underlines that many things still remain to be done : it’s a continuous improvement. One of the challenges to be solved, for example : it’s more expensive to correctly get rid of the construction waste instead of throwing it. She thinks in particular that it could pass by a better organization in the construction sites, to be defined upstream, as well as a potential reutilization of the waste within the company. Another challenge ? Without any surprises, materials overwrapping. All these elements still have to be considered and hopefully solved in the future. 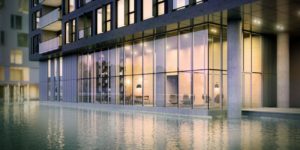 I was obviously tempted to question Melanie regarding the place of women in her company. Real estate and construction business is quite specific but has evolved a lot these past years, particularly with the ecological houses’ growth, and we could see a correlation with the fact that the women are more and more in the design, implementing and managing teams.

I wanted to know more about her vision on the question, so I asked her specifically about the composition of her teams. Melanie explains that there is a good diversity men/women withing them, and that women are present in every department in the company, which is, according to her, very important for the field, because men and women are obviously complementary.

But for her, a woman has to professionally integrate herself differently than a man would do. Especially because she is different, so if she tries to use more ‘’masculine’’ approaches, it will not work, in addition to not being properly integrated in the teams. Moreover, it will affect her credibility on the sites, from what she could find out on the field. Melanie thinks, contrariwise, that a woman has everything to gain in integrating in her own way, following her way to be and her specificities as a woman. She is convinced that they better exert their leadership as women, not as men. She believes above all that it is feminine aspects that impacts a lot the sustainable development principles, and that ecological stakes require an open-mindedness as well as a global vision of things. And obviously a sensitivity to the environmental question.